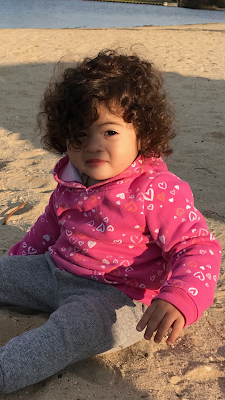 When I first started this blog I wasn’t sure exactly how personal I wanted to get. But mostly importantly how much of my kids lives that I wanted to show.

But this morning I took a picture of my girl capturing her true essence as a little person in all its glory and I felt like I just need to share this.

So let’s start from the beginning of the morning. She woke up about 6:45 and was already snuggled next to me in bed. So I put on Goldie and Bear because lord knows I’m getting tired of the damn Mickey Mouse Club. She is always a little mushy in the morning and needs a little extra snuggle time whether it’s me holding her or just laying in bed a little longer.

So we hang out until about 7:15 when the baby boy wakes up. He also wakes up pretty happy today and we let him join girl time and watch a little TV with us. Which of course doesn’t last very long.

So we do the usual diaper changes and breakfast routine.

Today I decided to do my son’s 4 month pictures even though I am a few days late… So I think to myself while I am going to dress him up so cute that I should dress her up too and try to get a few pictures of them together. I really do not have a lot! It’s near impossible to get a good one of the two of them, I guess you could say I am feeling motivated this morning.

So first I got him all dressed and ready to go. I only half dress my baby girl in her shirt and I did her hair. We did her hair the way we do it most days. She really doesn’t love her getting her hair brushed so maybe I let her sit on the bathroom counter with her feet in the sink. Just maybe I also let her put on the faucet to splash her little feet. ( Hence why I only put her shirt on ) She has the curliest and most beautiful little head of hair. I mean I am not partial or anything but still.

I am getting off topic a little bit but since I mentioned it I have to share his 4 month picture with you. 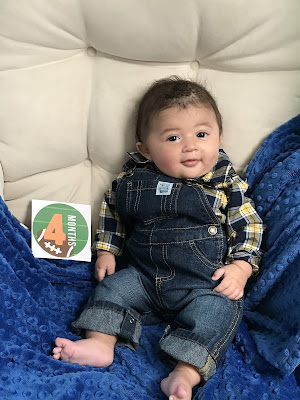 OK so while this cuteness was going on….
My baby girl absolutely LOVES taking baths. I mean literally any time of day that I would let her take a bath she would. So before I had started taking the pictures of my little man. She was trying to get into the EMPTY tub. I didn’t want her to fall over into the tub and hurt herself so I just picked her up and put her inside. There were already some of her toys in there and I knew it would keep her occupied for literally 3 minutes is all I needed.
Then I heard the water running.
PLEASE keep in mind the bathroom is across from his bedroom and I can see directly into the bathroom at any point!!!
Anyways, I go in and check and see that she is just splashing her feet in there.
So I go back and take a few pictures. Peek my head in at her. Check the pictures.
I take him off of the chair and get him settled in the living room with pillows so that I can finish getting the baby girl ready and try to get a few pictures of them together, Go back to get her and…. this…. 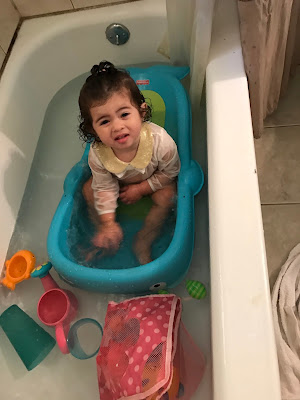 ” Oh hey ma, yeah I am not feeling the photo shoot. I think we should push it back until after my lunch break. “
This is who she is. DETERMINED.
When my daughter was around 6 months old and I took just the cutest picture of her and decided that I had to enter it into the one of many cute kid contests that are around these days. That is until you get to the end of the application and you have to pay to enter and I’m like no thanks! This one in particular contest asked to describe your child in just one word and I right away chose DETERMINED.
She always has this sense about her that when she is on a mission to do something, she is going to do it. I mean to the point where I can call her name 8 times in a row, she obviously hears me and is obviously ignoring me because she is just too busy into doing whatever it is she’s doing to be bothered. She will not be distracted for a moment until she is done.
And yes kids should listen to their mother when they are being called, But maybe she doesn’t have to stop what she is doing every time someone is trying to get her attention in life. And maybe she doesn’t always have to do things by the book.
I love her creativity. I love the way she does things on her on own time. And as her mother I promise to never push her to be anything but herself.