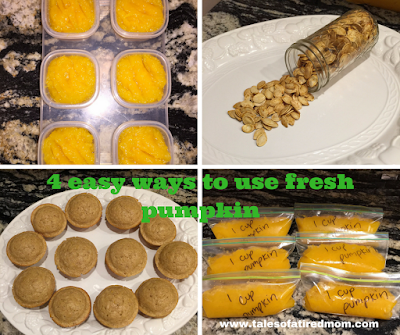 Since my babies are too little to carve pumpkins, I decided to use the entire pumpkin for cooking purposes. 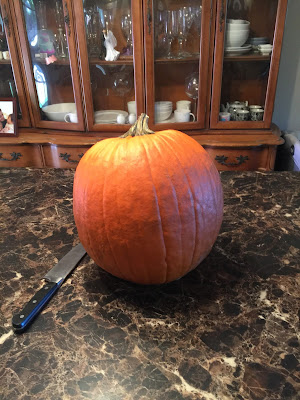 The first thing I did was cut off the top and scoop out all the seeds and inside stuff. Then I cut the pumpkin into sectioned pieces. I got a big pot of water boiling and threw the pumpkin in. Boil for about 10 minutes or until the pumpkin is soft enough to easily stick with a fork. Let cool for a few minutes and then scoop flesh off of skin.
TIP – Do not worry about trying to get the skin off the flesh before cooking. It comes off very easy when cooked. 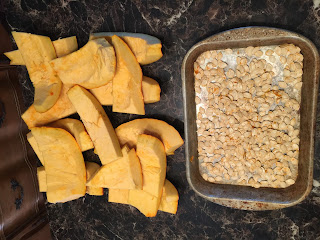 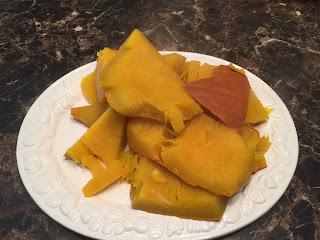 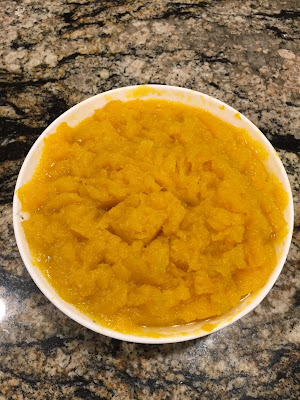 #1 Pumpkin Seeds
1. Cut off top of pumpkin and scoop insides out
2. Separate seeds from gooey stuff
3. Spread on a baking sheet and sprinkle with seasonings
Bake for approximately 10 minutes on 350 degrees
I love me a salty snack so I like to just season with salt. But I have also done cinnamon and sugar which is a nice sweet kick.
# DIY Homemade baby food
1. Cut pumpkin into sectioned pieces and boil in water for 10 minutes or until soft enough to easily stick with a fork
2. Separate flesh of pumpkin from skin and put into food processor
3. Add breast milk or formula and blend until smooth
4. Freeze extra
I literally became obsessed with making my own baby food for my daughter. I just couldn’t believe how easy it was. The best part of it was being able to freeze extra and just pulling it out when I needed it, instead of having to run to the store. My pediatrician suggested starting with orange vegetables first so here is another good one to start with.
#3 Freezable Fresh Pumpkin bags
Label, Scoop and Freeze 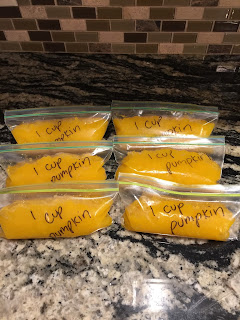 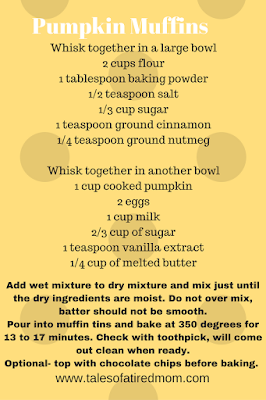 I made this recipe a printable! 🙂
Today’s forecast is 61 and sunshine. Let’s enjoy the last days of fall!
For more fun fall activities, check out our bucket list here…  Free Printable Fall Bucket List!